November Fun Before The Holidays

Ellie is so cute in the kitchen. Actually she is pretty darn cute anywhere she goes but the other day she was watching me cook in the kitchen and I left the flour bucket open and got busy cooking. A few minutes later I looked down and saw Ellie playing in the flour. I let her continue awhile, but the time came for me to clean up and BOY was she not pleased with that! 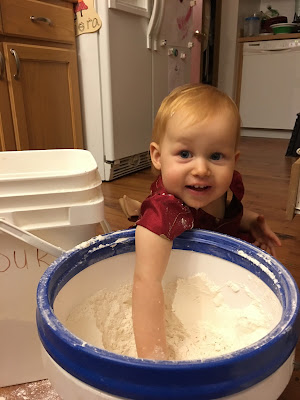 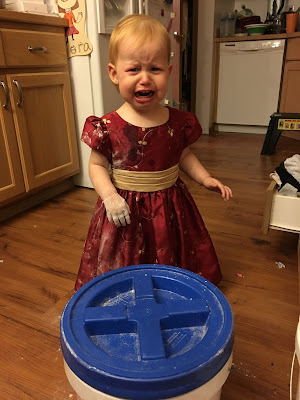 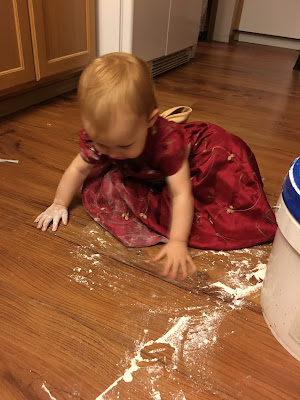 Dan's B-day was November 9th, and we've been so crazy busy with our craft business preparations. I broke down and bought a cake this year. I felt rather guilty about it too. But....I eventually got over it. I bought a chocolate cake from Costco and it was pretty good. Happy Birthday to the best Husband ever! I couldn't find a picture of him opening any gifts or blowing out the candles. I'll just add that to my guilt pile. I'll do better next year, I promise! 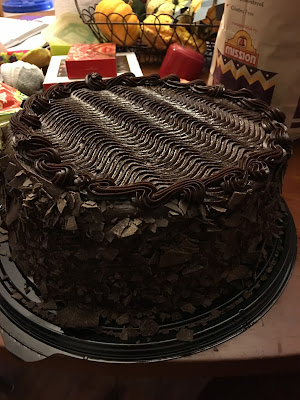 Here's another reason I've been so busy. It's chicken canning season! 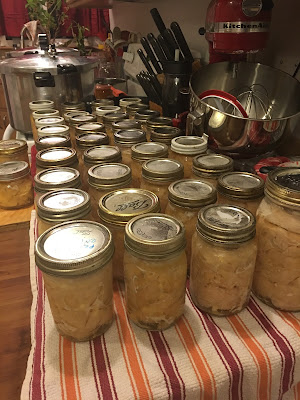 We've been getting things ready for our craft night making replicas of the hurricane lantern we got from Dan's Dad. They turned out awesome! 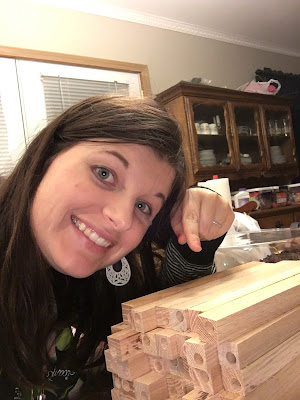 This is a picture of the lantern kits all prepped and ready for the craft night. 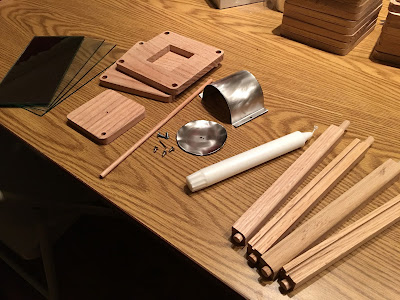 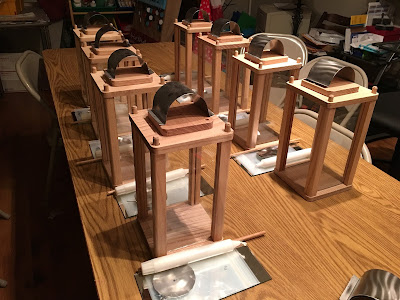 Here's what they looked like all assembled. Aren't they just gorgeous! I made one for us to keep too so now we have two total. It's a lucky thing too...We ended up having to use them during another storm and power outage. Talk about good timing! 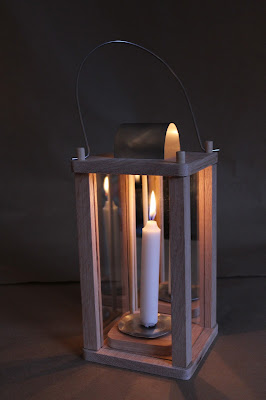 The craft night went rather well but unfortunately only three people were able to show up to our craft night due to some nasty weather and flooding that covered roads they needed to cross in order to get here. So I ended up assembling the rest of them and then delivered them to those people later.


And to add yet another project to my already busy self! It never seems to end. Especially when you're the wife to the Cub Master in our ward. For Christmas Dan is having the boys make portable checkers sets. They will then be taking their sets to the local retirement home and playing their games with the residences who live there.
I can't remember who's idea it was, but I ended up making all the drawstring bags that'll hold their checkers pieces. Dan sure is lucky to have me for his wife :) 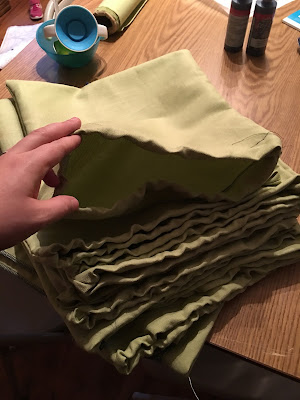 The aftermath from the storm was pretty extensive all around town. Our friends Ben and Kara May got hit pretty good where they were living in Marysville too. I called Kara up the next day and the kids and I went over late morning and helped clean up her yard of all the broken tree branches that fell in their yard and even went over and cleaned up her elderly neighbors yard. I hope that my kids are learning the joys that come from serving others. I'm trying to teach them. 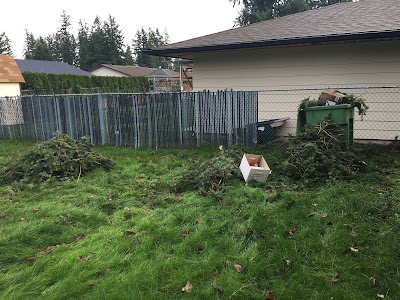 To take a break from all the crazy we decided we needed a game night. So we got a babysitter and invited a few friends over for dinner and games. It was a good time too! Our friends Dave and Kristi hoover from our Stillaguamish ward brought the game Pie Face. It was a hoot! 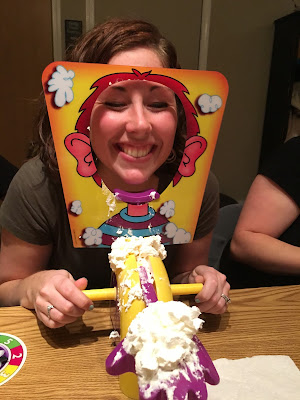 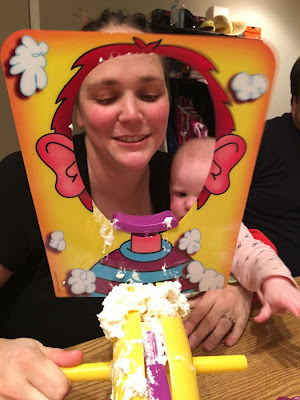 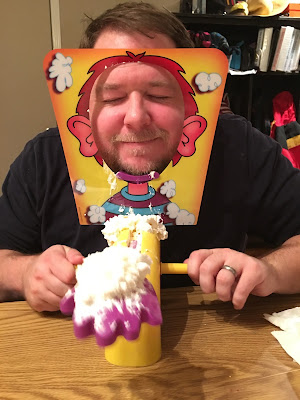 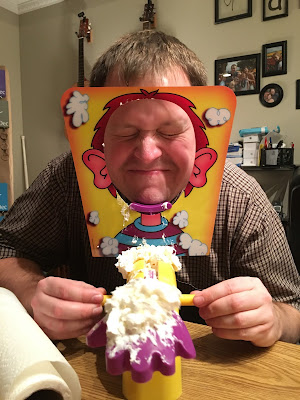 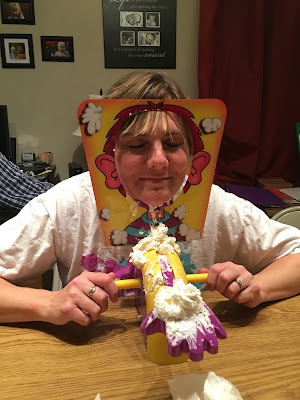 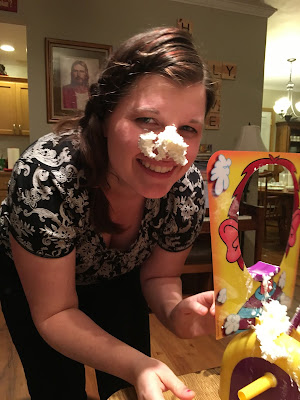 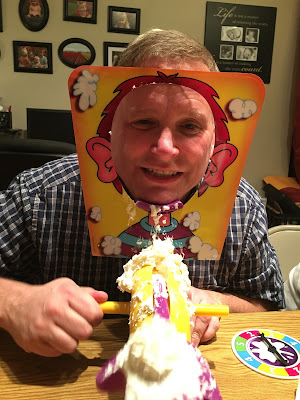 Check out this cutie. Just crusin' in car with mommy's sunglasses on. 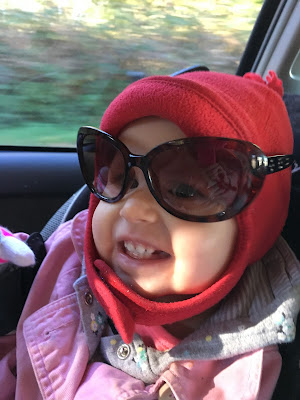 The kids doing some coloring with Maddie Fanning our neighbor. They just adore Maddie. She's in middle school and you'd think she'd rather spend time with the neighbors more her age but no, instead she treats them like they are her cousins. The kids are so close. The kids will watch for her van to get home from dance practice and run over to greet her before she even has a chance to get out of the car. 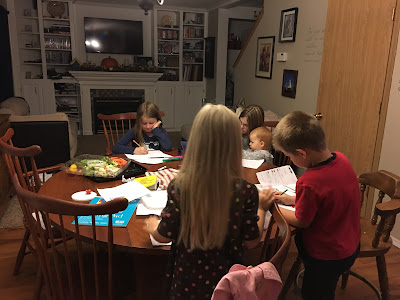 Posted by Goings on at the Glenn's at 9:19 AM No comments: Links to this post