Recliner Progress! It's Coming Together!

Can you believe it!? It is actually coming together! I know I have talked about it before and told you my goal was to have this baby done by December, well It is now December! I am still not finished, but I have made some huge progress.

Yesterday I had the URGE! The DESIRE! and the WILL! to get busy on this thing. And I won't lie I spent probably a total of 8 hours straight just working on it too! From the time the kids went down for their naps up until the time to call it a night, I worked, and worked and worked. (mind you... I took breaks for helping make dinner, feeding everyone, bedtime prayers, stories, and songs). So not the entire 8 hours.  But a LOONNG TIME! My husband was such a stud too and didn't complain one time about his obsessive wife. He even made dinner! WOW! I love that man!

I am just about finished with the top portion of the chair now. The only thing holding me back is that I ran out of fabric buttons to cover (actually I just bent 4 of them in the process and that left me being two short. Just my luck!)  So a trip to JoAnne's is in order.

But here are some pictures of where "The Beast" is now. 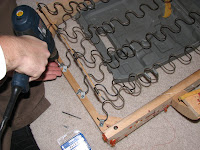 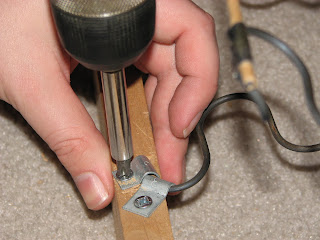 A couple of the inside springs had broken away from the frame so Dan turned into Mr. Handy Manny and fixed them and then also reinforced the other springs to avoid them breaking later. What a guy! 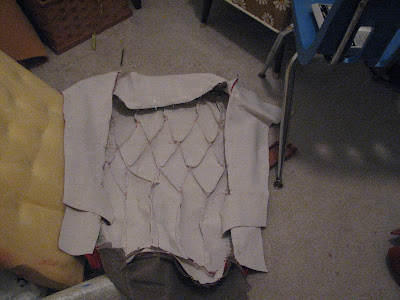 Yep those are PLEATS! Ever single one of them! AND I DID IT! Whew! When I took the chair apart and saw that, and knew I had to recreate them, I almost stopped right then and there. BUT, I DID IT! I amaze myself! 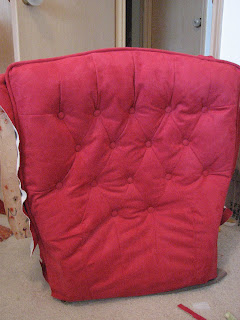 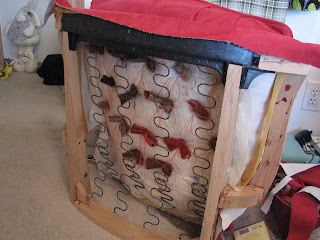 And here it is now. It isn't attached to the frame yet but as soon as I get those last two bottom buttons put on, and the last seam stitched up, its all staple and go! Well....for the top chair portion anyway. I still have the entire bottom to go.

Isn't it looking great! It gets me excited to keep on going.

Good thing too. It is much too late to turn back now.

I would have skipped right over those pleats. Awesome job, it's really looking nice!

Wow. You are one ambitions lady!

I can't wait to see how the end result turns out!

In a word--AMAZING! Your talents far surpass any rehupolstering that I ever did. Good job sweetheart! Je t'aime