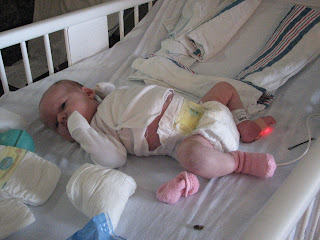 Ok I am going to give you all an update of what has been going on with Emma. Starting on Saturday the 2nd I took Emma into our walk-in clinic because she was coughing profusely and seemed to have difficulty breathing comfortably. They took a look at her and sent me to the ER since she was have retraction in her lungs and was working much harder than an infant her age should.

At the ER they hooked a little monitor up to her foot that measured the oxygen levels in her blood. They weren't at their best either. It had an infared light on it and when she was all wrapped up it glowed red through the blanket. It sort of reminded me of a little glow worm toy I had growing up.

They also listened to her lungs and did test for pneumonia, RSV (which it ended up being), Plutusis, and something else I don't remember. They also tried a breathing treatment with albuterol to see if they could get her airways to open up a bit more. Oh, and they also took x-rays of her chest. It was not a fun stay. Poor Emma was so worn out from not only trying to breath but had the other stuff on top of it. I was so worn out too. Not to mention this was my birthday...What a way to celebrate right?

I thought a energetic child could make you tired but MAN! having a sick baby is even worse! We were admitted to a room upstairs in the critical care unit so they could keep a closer eye on her and we could have a private room. There they continued the breathing treatments every 6 hours or so and did lots of suction to keep the excess mucus from getting in her lungs and causing more problems such as pnemonia.

The nurses and staff were so nice and made me as comfortable as a sleep deprived and worried mother could be. The hospital even provided me with complimentary meals 3 times a day. I even got a chocolate brownie the night of my birthday! Occationally the nurses would come in and chat with me about everyday things rather than what was going on with Emma. It really helped to get my mind off of things.

Dan would also come in the evenings to give me a breather and a chance to get out of that room and go home for an hour before I had to be back to feed Emma. It was nice but I still couldn't get myself to fall asleep during those breaks. I think my entire stay over the 3 days there I had a total of 4 hours of sleep.

The chest x-ray results came back the first morning and the radiologist saw a patch on Emma's left lung and so they kept us another night. Then the next morning we were told to stay yet another night because the previous evening Emma had an episode where she kept having coughing spouts with lots of gagging and her oxygen levels kept going below 85%.

So all that day and night I just prayed her Oxygen levels would stay at the 98-100% like they wanted and that there would be no more hiccups. And I can just say that I know Emma's guardian angels were there with us. She had no more episodes. Her levels stayed high, she didn't require any more breathing treatments, and her feeding times increased and she was back on the breast whereas before I had to pump and bottle-feed her to make breathing easier. But the best comfort for me was that Emma smiled.

Our entire stay she would not only smile at me but every once in awhile I'd see her starring off in the distance at something and a huge smile would come across her face.  I just know someone was there watching over her.

That following morning the doctor came in to check her over and gave us the green light to go home. She sent us with the rest of the antibiotics that she had taken to prevent any bacterial infections that might come up, and the instructions to continue the albuterol treatments as needed rather than the every 6 hours. It was so nice to go home!

So here we are a few days later. Emma has been back to our pediatrician just to check up on her progress and she is improving all the time. She still isn't out of the woods yet. The doctor could still here some rumbling in her lower lungs while we were there. Which she said she had expected to. And we still have coughing fits and raspy moments here and there, but for the most part she is doing much better.

We had been planning on traveling this next week (Emma and I) to go to Boise and Rexburg, ID for my little brother's wedding/reception. I was sooo looking forward to seeing family and spending time with my little sister, Dan's cousin, and everyone, but I HAVE to do what is best for my baby. I'd do anything for her and she solely relys on me to do what's best for her. So we are staying home and will continue to help her get better. I am so grateful for all the prayers in her behalf and for all the help my mother-in-law has been by coming up here yet again to help out. I seriously don't think I could have done it without her help. Thank you so much Shellie!
Posted by Goings on at the Glenn's at 11:12 AM

awww, poor little Emma. Glad she is doing better! And glad that you have family (mother-in-law) to help you out. I can't imagine 3 little ones!

Wish your mommy could be there too! Know that you're in my heart and prayers . . . NON STOP.

So sorry you guys have had to go through this but so happy little Emma is on the mend. She is just so cute!!!

Oh dear. I am so sorry you had to go through that, I am so glad that things seem to be on the mend. What a scary experience!

So hard to have this happen when she is so new. I am glad to hear she is improving!! Thinking of you!