Merry Christmas! This morning was exciting. It was fun to watch the kids open their gifts. Kiera would get stuck on one thing and not open another one til she was done playing with what she had just opened so gift opening lasted a really long time. But that's ok. No harm in having the fun last. Here's a picture of Ethan and Kiera sitting in a pile of stuff. Ethan had just as much fun wandering the house and playing with the old stuff as much as seeing new things. As you can see in the picture he stayed busy pulling the books off the bookshelf while Kiera opened gifts. 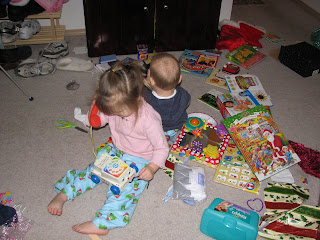 Dan got new camping chairs from my mom which have a sort of reclined back. He got sleepy pretty quick. I caught a picture of him with a giant bow on his head. Good thing he has no idea I took this picture. 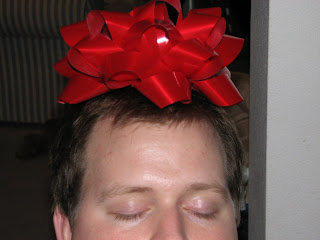 Kiera got a tub full of dress up clothes. She was pretty excited and started putting everything in the box on all at once. She'll have lots of fun with those in the days to come. 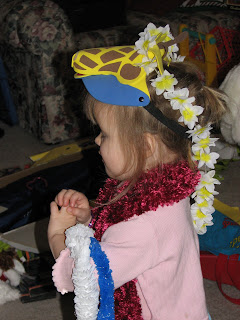 Here's Ethan being his happy self. He got a cute stuffed puppy from his great-grandma Thornock. When he opened it he got a big smile on his face. 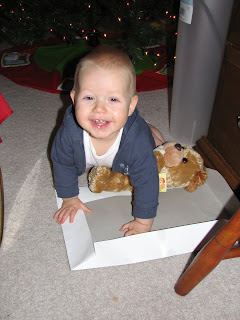 Kiera opening her stocking and finding a barking Christmas dog. 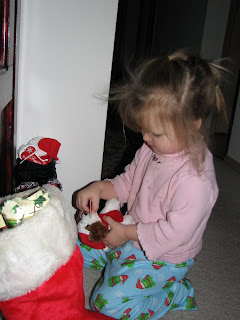 our rocking horse was a success! We got a little worried when Kiera saw it for the first time this morning. She sat on it and looked as though she was going to fall back to sleep. But as things went on and she woke up a little bit more she got back on a few times and had a great time! We're so happy she loved it. It should last a loooong long time. It turned out so cute too! 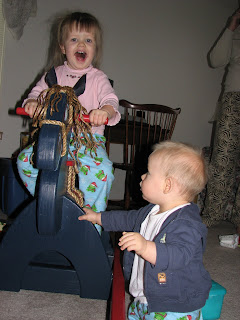 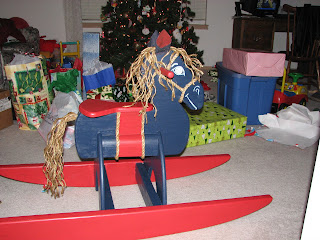 These pictures aren't from Christmas day but a just a couple days before. Kiera just loves the snow! She especially loves to taste it. Whenever we go out the first thing she does is take a handful and eats it. She is so fun to watch. 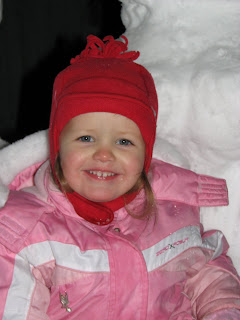 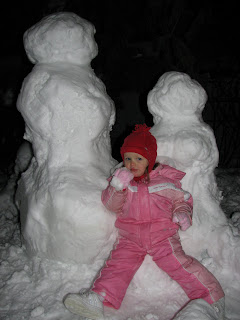 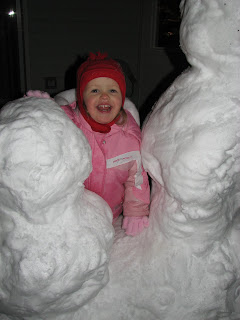 Looks like you guys had a fun Christmas! Your rocking horse is amazing, what a fun thing for the kids!