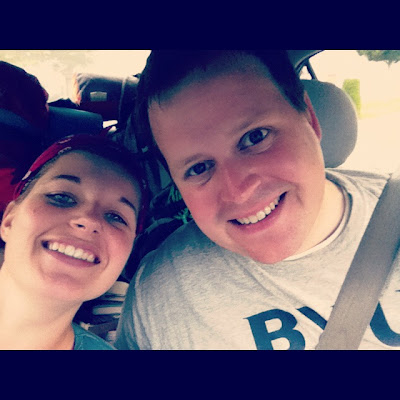 Well we survived! It was definitely an adventure. But not one I want to repeat any time soon. We left around 12:45 and drove up to the trail head. We started hiking about 3:00 and went up until just before dark. It was a pretty rough hike but I was determined to accomplish something big. As we were going down the other side of the mountain (about a 1/4 mile from where we ended up camping) I took a spill and rolled my ankle. OUCH! It was WAY to late to turn back so I pushed myself the rest of the way down to the lake. It was not fun. Dan was upset at me for making him keep going instead of stopping to camp by the first the lake we passed 3 hours earlier. It was cold, It was foggy, and misty! We knew we made it to the lake but could only see out about 15 feet into the water because the fog was so thick. It made for a pretty eerie night. We cooked our hamburger helper on our sterno and made a pot of hot cocoa. Then we tried to sleep. It was a rough night. My foot hurt every time I moved, Dan bruised his hip on the ground since he gave up his sleeping mat to me, we were paranoid at every noise we heard outside the tent but knew we would be able to see anything since it was so foggy. It was a pretty sleepless night. I kept waking up in hopes to see the sunshine so we could start our way back out of there. But knew it wasn't going to be easy with a busted foot. Morning finally came but it was raining! We waited it out and cooked up some oatmeal and had some dried pears. Got a couple more minutes of shut eye and decided we should probably break camp (babysitters aren't cheap ya know).

I was really worried about the hike back out of there. I knew how steep it was, I knew how far it was and I was not looking forward to it. I asked Dan for a priesthood blessing and THAT MADE ALL THE DIFFERENCE! On our way down we met up with a few other hikers who could see by my limping that I wasn't doing very well. One of the guys had a wrap in his first aid kit that he gave me. That made a huge difference. Then as we were about a mile and a have away from the car I about lost it. I could feel the tears coming on and didn't know if I could keep going. I remembered what Dan's blessing said and all of a sudden I felt like someone else was walking with me. And the most remarkable part was I also felt no more pain in my foot. Every step I took I was expecting the pain to shoot up my leg but it didn't. I believe Heavenly Father sent some angels my way to help me. I was so grateful that the tears came anyway but this time they were good tears.

We made it back to the car and it was soooo nice to get that pack off my back. We were both exhausted and sore but we did it! I had to laugh at myself through it all because last week when Dan told me he wanted to take me on this trip and to find a babysitter I had the conscious thought that I hoped the trip would be more than a play day. I wanted it to be a spiritual experience. HAHA! What did I get myself into? :)

It was a beautiful hike. I do have to admit that. And it was wonderful to spend it with the love of my life. And even though it was cold, wet, long and hard we grew closer together. Here are some pictures we took on our hike. 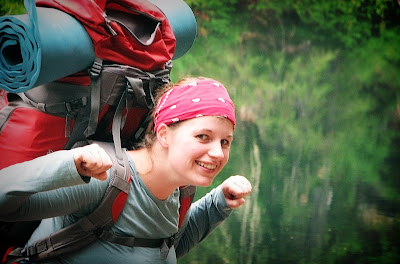 We joked on our hike how nice it would be to have an escalator or chairlift to take us to our destinations, but in reality, without all the hard work and climbing we would never have been able to see the views we did or have the experiences that helped us become stronger.  I am sure at times in life our Father in Heaven wishes he could carry us and protect us from hurt and pain but he knows that to become who we need be, we have to go through those hard things because when we conquer them we realize we are much more than what we thought we were.
Posted by Goings on at the Glenn's at 5:19 PM

Wow! Good for you. I'm not quite as jealous anymore, though I am impressed you made it to the very end before you "almost" cried! I must be a cry baby! I would've cried a lot more than that! STill sounds kind of fun though!