Yesterday I woke up to the sounds of my husband getting ready for work and him telling me goodbye for the day. Then after he left I dozed off again. After a couple more hours I awoke to the sound of Mega Bloks being thrown against the kid's bedroom door. I shouted for it to stop and then thought nothing of it. I got out of bed and then headed to get the kids ready for the day. When I opened the door I found my 22 month old walking across the top of the dresser, his sister inside his crib and toys EVERYWHERE. At least nothing serious had happened, and I got Ethan down asap.

A little later after breakfast it seemed like there was nothing but whining and fighting and complaining on and on and on. I got to the point where I had enough, and both kids went back in their room to settle down and play "quietly" or at least until I was ready again. Tell me I am not the only one on that one either. 15-20 minutes past and it got WAAAAY too quiet. And you know that is never a good thing with little ones.

I went to check on them. When I opened the door this is what I found. 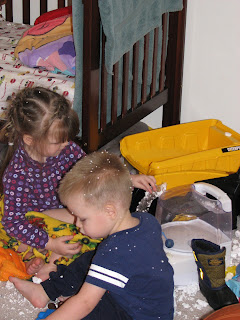 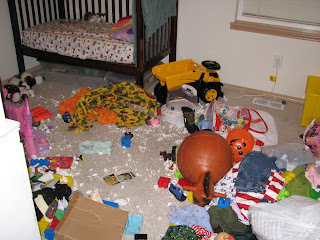 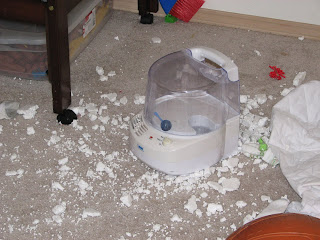 Pretty isn't it? Hopefully my kid's bedroom isn't the only one that looks like this either. Minus all the white stuff of course. That wasn't there before, I promise.

The kids had taken a picture frame box that was on top of the dresser and took out all the packing foam, broke it up, and were putting it in front of the humidifier fan and watching it blow up like snow.

Ignoring the fact that I was going to have to do to a lot of clean up; it was actually quite funny. Hence the pictures. And they were having so much fun too.

So I guess constantly cleaning is just something I am going to have to continue getting use to. I'll just have to enjoy the little moments while I can. Sigh...What now?! Where's the vacuum?
Posted by Goings on at the Glenn's at 10:35 PM

I'd like to say that the constant cleaning ends...but I haven't gotten there yet. LOL
Maybe next year when the youngest is in school??
Of course I have my own "messes"
(unfinished projects, fabric, papers to file, etc) that are waiting on the back burner.
Sometimes, I think every mom deserves a "clean house/clean sweep" intervention where a team of people come in all at once and put your hourse in order and all pretty...I can dream right?? Where's the clean house fairy when you need her/him?

Haha...that is awesome! Reminds me of the time my daughter "flocked" the dog with flour. She said she was making it snow on her.

You never ever did any thing like that when you were their age, Right? Oh, you do not remember the book shelf full of books all over the floor? Or the flour fight in the kitchen. Oh yah, Mom started that one.
It was fun seeing eveyone looking like ghosts.