Yep you heard that right, family members as in two! No, we aren't having twins. Whew! Wouldn't that be something?!

Instead, these new family members are orange, like to swim all day and all night, and eat little colored flakes.

These past couple weeks I have tried everything to get the kids to pick up after themselves. I decided that me doing it for them was not fair, and that if I kept doing everything for them they'd never learn to do it themselves. So I did the hardest thing and left their messes alone. It drove me nuts! It was awful and I dreaded it if anyone would want to come over because my house didn't look anything like it should. But finally, the kids got to work and cleaned their entire room AND the front room all on their own. The house looks cleaner than it has in 3 weeks!

I told the kids at the beginning that if they did what I asked we could go to the pet store and get a fish. Well, since the kids held up their part of the deal it was up to mommy to hold up hers. So, today the kids and I set out to find a couple new swimming friends.Their names are Dora and Buzz Light-year. The kids picked the names themselves too.

I spent about $14.00 total for their little set up and the fish themselves were only .28 cents a piece! Not too bad for the kids very first pet. We'll see how long they last. I put them up high enough that the kids can't get too playful with them so hopefully we won't have to send them on the porcelain train ride anytime soon. 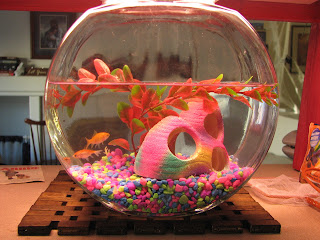 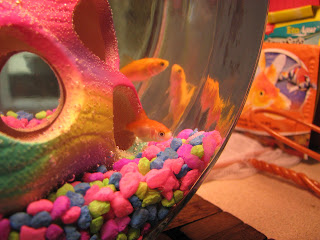 I love the colored rocks. Now is it your job to feed them and clean the tank? Steve wanted to get clayton fishes and I told him fine, but I am not doing anything! I fed them only because Steve kept forgetting and Steve cleaned the tank!