Today is Halloween! The two older kids went off this morning in their costumes for their school Halloween parties. I am sure I'll have an ear full when they get home. They both were very excited! But before we go out tonight for trick or treating I wanted to share what we did last night at our ward Trunk-or-Treat/Chili Cookoff.

I was in charge of making the prize for the best overall chili and so I made a Halloween apron. It was very cute. Wish I had taken a picture of it. But I guess I got too caught up in the project and didn't think about it when I finished. Oh well.

I also took a crock pot of chili that I had tested out at our "couples only" Halloween party last week. Here's a picture of Dan and I at the party. Animal, and Cookie Monster. Aren't we cute? 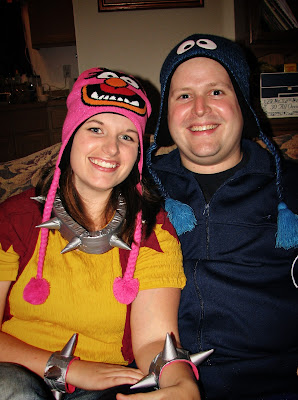 The chili was a HIT! and the funny thing was that I won! But instead of them giving me the best overall prize (since I was the one who made it in the first place) we gave it to someone else. They just didn't know. Shhhhh! Just knowing I won is good enough for me.

One of the primary presidency members set up a photo backdrop and took pictures of everyone throughout the night. I was so antsy to have ours taken since I never got the chance to get a group shot on our own. But I had a problem! Dan still hadn't shown up from getting off work! I was pretty upset! His working late every night is wearing on me.

So I tried my best and juggled bringing in chili, cookies, the prize apron, loading up 3 kids in costume, feeding 3 kids once we got there and found seats, AND I had to take them around on my own for the trunk-or-treating portion. I was so grateful for the sisters who held Emma for me when I needed an extra pair of hands. When that was all done THEN Dan showed up. Can you sense my steamage? I know it wasn't all his fault and he did indeed have meetings til 6:00 but boy I wish sometimes he'd have the guts to say, "sorry I need to leave early for a family event we've had planned for the past month." Just sayin'. Ok enough venting.

I did get to have our picture taken after all. The photographer is one of my good friends and she kept the backdrop up until the last minute just for me. I had brought Dan's costume along for that purpose alone. And yes I made him put the WHOLE thing on even when he asked if he could just up the top half on. He owed me that much. 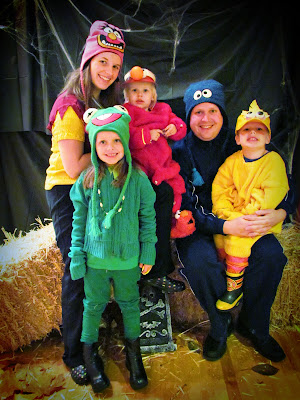 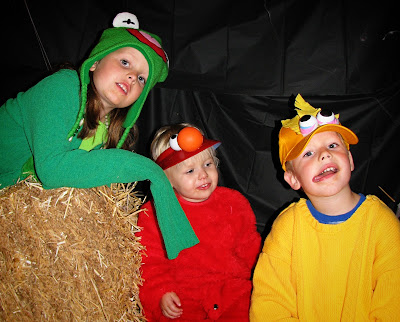 When we got home we decided that it was now or never so we broke out our pumpkins and carved away. 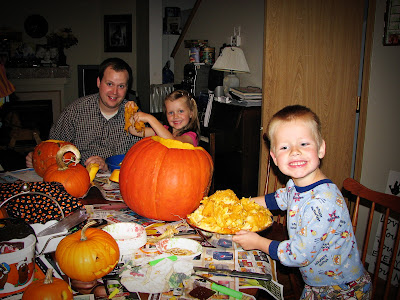 The kids had fun scooping out the pumkin guts and dug out the seeds for some roasted pumpkin seeds that I will probably make up today. Then they were off to bed while Dan and I finished the pumpkins. Emma stayed up with us for a little while and got to pose with her very first jack-o-lantern. It was the tiniest pumpkin I have ever carved and Emma seemed pleased. 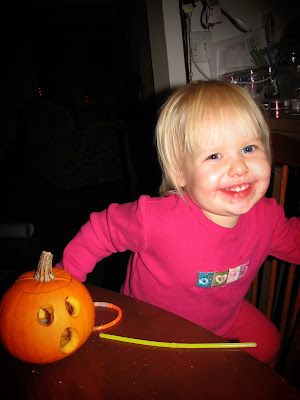 And here they are all lined up. I love the look on Emma's face too. It was the best I could get. It was hard to get her to sit still enough to get a smile without the picture ending up blurry. 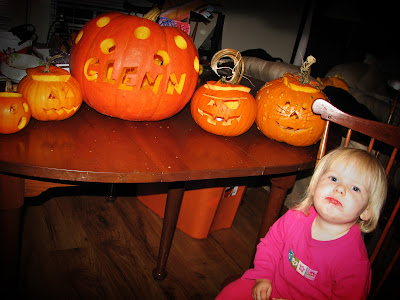 Dan told me that he'll be getting off early enough to take the kids trick-or-treating tonight so I'm happy about that! Maybe I can come up with something as an excuse for him to come home early on Thursday and Friday too. But that's probably pushing it.
Happy Halloween Everyone and be safe tonight!
Posted by Goings on at the Glenn's at 10:23 AM