I am finally getting around to posting about our trip again. I have to take the minutes while I can. Nap time for the kids just doesn't seem to be long enough these days. Sometimes I wonder what would happen if there were more hours in the day but I think it would just give me an excuse to be lazy.

Ok, so our last and final day of our Seattle Staycation we decided we wanted to do something more relaxed and recreational. We decided that a walk around Pike Street Market was a definite need before leaving. You can't really go to Seattle and not go to the market or it isn't a real Seattle trip. We walked around for a bit and since it was the weekend before Mother's day there were flowers everywhere! Rows and rows of BIG bundles for $20. I should have taken a picture but I was too enthralled I guess.  We bought some gifts as a thank you's for Grandma and Grandpa staying and watching the kids for us. We found some orange/citrus glazed almonds which were delish! And a cute pair of bagel tongs made from exotic woods. It was fun to look at all the cool crafts that people were selling too. I think Dan added to his wish list of woodworking projects while we were there too.

We walked along the water front and found out that it was the Maritime festival. They were having tugboat races, and chowder cookoffs. It was pretty cool. We happened to pass a little bistro that was doing a BBQ out front along with their clam chowder. We hadn't eaten breakfast and it was already lunch time. We ordered some WONDERFUL chipotle BBQ chicken sandwiches and the guy was so nice he gave me a free bowl of chowder too! You're supposed to purchase chowder cookoff tickets for $9 to go around and try 9 different restaurants chowder but I got to try some for free! It was soooo good. Even Dan (who does NOT like clam chowder) said it was really good. Now that is saying something.

We walked down to the festival and took some pictures of the boats and the coast guard helicopter doing a demonstration. 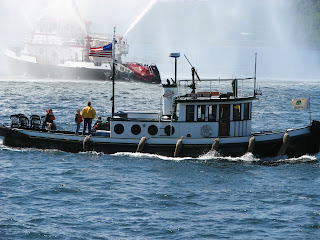 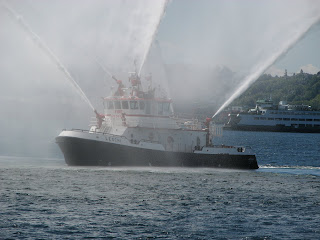 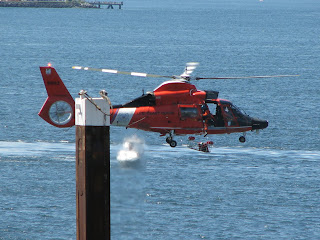 Then we went to the Maritime Museum. There they had giant models of cruise ships and cargo ships done all in legos. Dan was impressed. 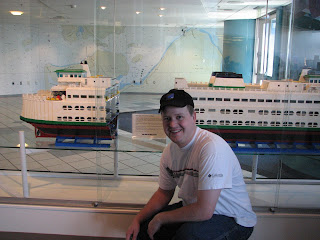 Upstairs they had a set up as if you were on a real naval boat with telescopes and lots of buttons and dials to turn. They even had helmets to wear. This is where we started wishing the kids were with us. Funny how that works huh? 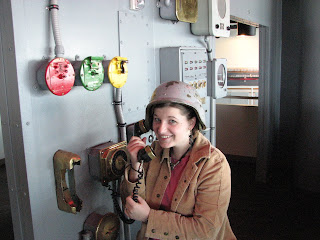 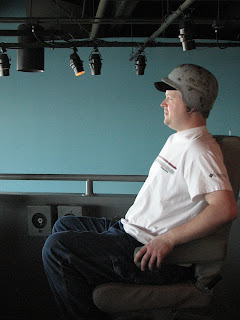 After playing a bit we decided we'd better start heading back so we'd have enough time for our planned activity. We headed back to the hotel. Here's a picture of a guy I took as we passed Pike Street Market again. He was singing, playing the guitar, and playing the harmonica all while hula-hooping. Wish I could do that. And I loved his hat... 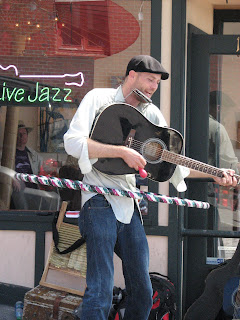 The Sheraton lets you keep your car in the valet parking until 6:00 p.m. even after you've checked out. We got our luggage that was being held for us by the Bell Hop (I have never been to a fancy restaurant with Bell Hops before, it was really nice) and then drove down to Washington State University. We when to the WAC (activity center) and rented a canoe for $10/hr and paddled around the lake right there. It was a gorgeous day and there was a really pretty treearbor park that you could paddle around. We saw lots of cool birds and even turtles. Before moving to Washington, I had never seen turtles in the wild and they were EVERYWHERE! All basking on logs in the sun. I almost left my camera in the car because I was worried about the potential of tipping the canoe but I am glad Dan talked me out of it. Here are some shots I took on the canoeing trip. 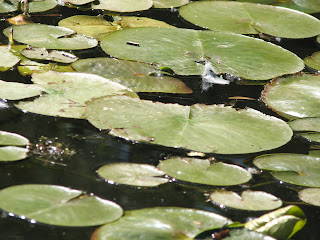 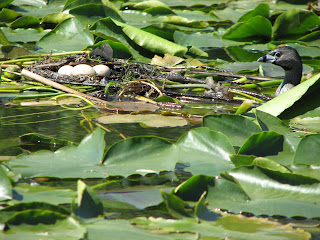 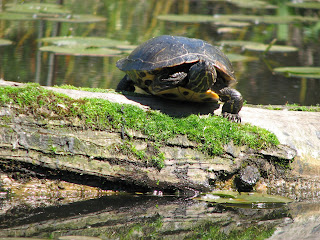 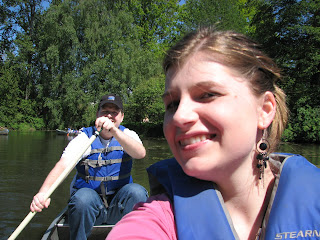 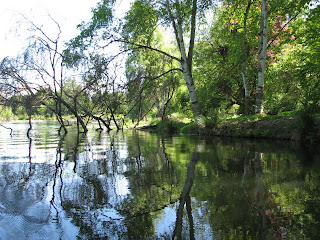 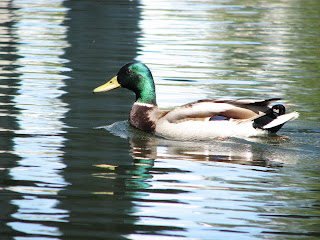 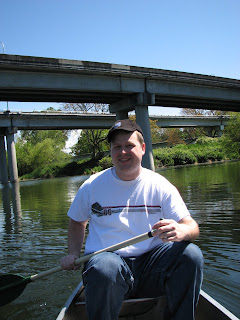 It was a little sad to go back home but there is something about being a parent (at least for us) that you can't go too long on a trip until you start saying "the kids would really like this" or "oh I wish the kids we here to see that" but it was sooooo nice to get away with my sweetheart and spend 3 days away. It makes my birthday that much easier to look forward to. It is definitely a tradition we'll keep. I think next year we'll do something a bit less city oriented and go out somewhere in the country, or go on a backpacking trip. Wouldn't that be fun?
Posted by Goings on at the Glenn's at 3:36 PM

Great photos--and what a great tradition! Glad you had a great time!