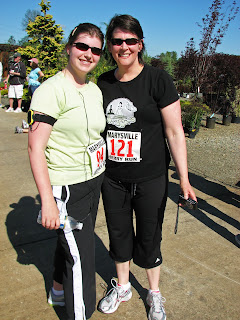 I accomplished something this weekend that I didn't know was possible! I ran an entire 5K without walking a single step! That's right ME! The one who doesn't run for anything other than an escaping 2 or 3 yr old. And even before running after them will shout first to see if they'll turn around on their own. You other moms can probably relate right?

Well, last Sunday I had a friend ask me if I'd be interested in running a 5K with her. Her daughter was originally going to run but had other plans come up. She offered to let me take her spot. She had already paid for the registration and was just going to consider the money good as gone anyway but wanted to see if I wanted to take her place. I was a bit hesitant at first. Actually a lot hesitant. I mean, it wasn't like I had been training for a long distance run EVER. I work out during the week sure, but I have never really been a runner. I've been in a 5K before back home but it was a walking 5K, I wasn't racing in them. I wasn't sure if I could pull this off. I thought about it for a day or so before talking myself into it and called her back to tell her ok I'd give it a try.

So, Wednesday is when my insanity settled in. What was I thinking? It was Wednesday and the race was Saturday. (That's a grand total of 3 days to train! 3! How on earth!?) I went to the gym that night and told myself, "Ok you're going to run 3 miles on the tredmill tonight!" (mind you this is the first time I had run in I don't know when...). I set the machine speed to 5.6 and went for it. It was a long 45 mins or running and stopping for a breather, then running some more and then walking again. I thought "what on earth did I get myself into?" Then the next night I went to my beloved ZUMBA class (I will have another post on that subject in a week or so as well. I can't wait!). The hour passed by so fast! When it was over I decided to push myself again and go for another run. I ran on the track; (thinking that It'd probably be best to run with my own leg muscles this time and not depend on the tredmill pushing me forward) I made it for 1 whole mile without stopping and called it a night. The next night was Friday, The hubby was out of town and I wasn't able to make it to the gym. All I got in was a few jumping jacks after the kids were in bed that night. I was scared! How was I going to pull of 3 consecutive miles?

Saturday morning arrived and to my surprise I woke up on my own before the alarm (That never happens!) I must have been anxious or something :). Or maybe Heavenly Father heard my prayers all week that I'd be able to somehow do this. I had prayed again the night before that He'd be there with me. He knew I had given my best effort to get ready.

I got dressed, packed a snack for after the race, made sure I had my mp3 player, got the kids up and ready for the babysitter to pick them up for the day (thanks Kim!), ate a slice of zucchini bread and then ran around the block once before my ride came. I didn't know what to expect but knew I'd give it my all and be happy with the results no matter what happened. Knowing I could say I tried would be good enough for me.

The weather was perfect! I couldn't have asked for better weather. On your mark... Get set... BANG! The gun went off and I took the first step... And I kept going. I didn't stop. Not for one second did I stop. Mile 1 came and went, then Mile 2, and then 2.5...Then Mile 3. Just 0.1 miles left...Push on through, push on through and sprint for the finsish! I MADE IT! I can't believe it, I MADE IT!

I placed 12th in my 20-29 age group, and my time was 34:22. Not bad! considering it took me 45+ on the tredmill 3 nights before! Can I just say, I am so proud of myself! And I can't believe I am saying this but I am thinking of signing up for another race. This might be addicting.


Thanks Cheryl for taking me along and giving me the opportunity to push myself. 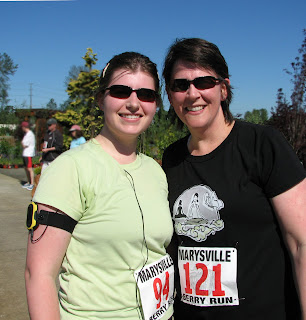 Congrats on your 5k! You ROCK!!!
I like your closet idea. Have a great week.
Bonnie

Wow Brittany! I'm so proud of you. You are a huge inspiration to me. I've been talking myself out of a triathlon in August but YOU got me pumped! I can do this. Way to go my friend!

Congratulations!!!! That is great! I am not a runner either, but have REALLY been wanting to try one! (the biggest loser really motivates me!)

Copgrats on the 5K. My sister just recently completed her first
5K as well.

I'm new follower to your blog. Thanks for checking out my blog today and for the tip on using lemon juice in place of vinegar when making sour milk when a recipe calls for buttermilk. I will have to try this as well.

Wow, I can SO relate! I laughed out loud about the few jumping jacks after the kids went down. Congrats on your 5K! I'm gearing up for a duathalon next month that our stake is putting on (3 mile run, and 9 mile bike ride). I can hardly run a mile without walking part of it, yet, but at least I have a month...and not one week!

Yay! I'm so proud of you! I'm bummed I didn't drag myself out of bed that morning to do it too. Let me know when you're going to do any others and I'll do it too (if you don't mind). I like knowing someone is there with me. Again- you're awesome! Way to go on three days of training!