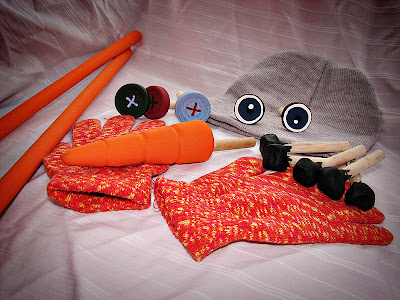 I have been wanting to post this project forever! But I didn't want to risk the in-laws seeing it before they received their gifts. For Christmas we take turns doing something for each of Dan's brothers and their families, we just rotate the families each year. This year we had Dan's brother Ryan. I wanted to do something fun and handmade that the whole family could enjoy and came across the idea of snowman kits on someone's blog; so I decided to do my own version. I love how they turned out!

The first thing I did was go out and buy some inexpensive hats and gloves at Walmart. I think they were about $1.50 a piece. I got enough to make 5 kits but when it came to making the rest of the kit pieces I realized that the white hat I purchased wouldn't really work on a white snowman. There weren't any other color choices to make each one different so I ended up dying the white hat with some turquoise RIT dye. I wouldn't recommend it though. The hat got pretty warped in the process. It will work for a snowman though I think. 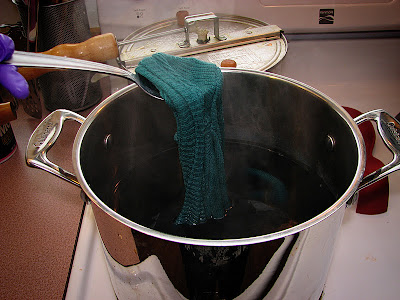 These are the gloves I was trying to match with the RIT dye. 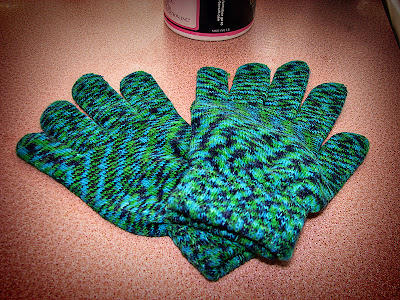 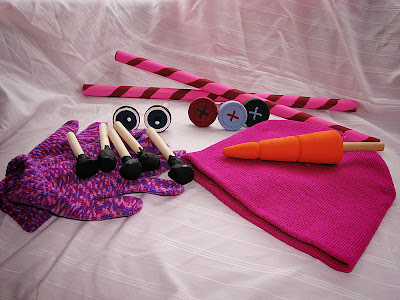 I also sewed a drawstring bag to store all the kits in using a tutorial from Make It and Love It. I just extended the bag height. The snowman face was done using some felt that I hot glued on the front of the bag. The drawstring is a shoelace that I found in my husband's dresser drawer. I now have a matching stray but plan on making kits for our family as well so it will get used eventually. 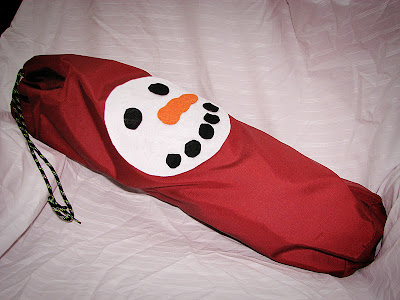 I didn't take pictures of all of them but there were 3 other kits. One for Mom, one for Dad and one for Baby. The noses on the kits are all cut to size according to age. Dad's is the longest, then Mom's and so on. The carrot noses were done on the lathe, as well as the buttons. The eyes are just a wooden dowel cut into discs, and the coal mouth pieces were done with Sculpey clay that I baked. All the face pieces were drilled through and a skinny dowel was glued in using some wood glue. Then lastly, the arms were wooden dowels that I cut and painted to match each kit.

They were so much fun to make and I can't wait to see pictures of them on the snowmen. We just need some snow!
Posted by Goings on at the Glenn's at 10:00 AM

your snowman kit is so adorable!

I’m having a link party on my blog today if you want to come over and share this I’d be just tickled pink! Here’s the link if you’re interested! http://caribbeanmissionarywife.blogspot.com/2012/01/t-time-51-and-link-party.html Happy New Year, Maria

What a fun gift! I bet they were super pleased with the thoughtfulness! And using it of course!

Very cute! You are so creative!
I had to send the link to my sister and brother in law. I think their kids would love these.

congrats on being featured today :)

How cute! I love these! I think your ideas are great and am a new follower. I would adore it if you'd stop by and follow along too!