I just thought I'd post a random thing today of something simple for which I am grateful.
Two things: one, cheerio boxes from Costco (ya know the ones with two bag of cereal inside) and two, paper bags from the grocery store.

Why you ask? Well, its a long story. As a matter of fact this has been a long week. My husband has been out of town since Sunday morning at 5:30 a.m. I don't like it when he's gone and I miss him so much when he leaves. Although, I appreciate his hard work and am very grateful that he has a job when there are many who don't. So it has been a long week with just the kids and I. I am starting to feel the need for some "me" time although I think I have done pretty well and have kept my sanity with having two busy toddlers on my own. (I don't know how you single moms out there do it!) I miss going to the gym every night and I much prefer running errands on my own rather than having to load the kids up at every stop.

I have kept plenty busy though. This week, and pretty much the ENTIRE week I have been working on a project. More business than fun but a project nonetheless. I received a sizable vinyl lettering order from a lady in Florida. I haven't had that big of an order in a loooong time. Probably since our Rexburg days. Anyhoo, It was a chore and was filled with lots of roadblocks. First, my vinyl software broke, so I ordered a new software and had it express mailed. Then, I couldn't get that software to work, so I tried another computer, and that still didn't work. Finally, I had to call in some favors from another lady in my Stake who also did vinyl lettering and went to her house to RE-design and cut out the lettering. (remember I have no hubby at home to babysit while doing this).

She was sooo sweet and kind to let me barge in on her and take up her space for I don't know how many hours. I hadn't even met her before! What a woman! I owe her a ton! I am grateful to have my brother and sister-in-law close by. Thank you Steven for watching the kids for me. Also, I have the greatest friend who stepped up without me even asking! And watched the kids for me for almost 6 hours so I could finish and send the vinyl on time. Thanks Naomi!

But back to my Cheerio box and paper bag. I finally finished all the vinyl lettering and was ready to mail it. But, being who I am, I didn't want to charge my customer more that I needed to and I didn't want to wait til the next day to go to the post office to get a box that it all would fit in. So, I got creative! Yes I know, imagine that. Ha ha. I looked around for a long time trying to find SOMETHING anything at all that would work. I was in my kitchen and glanced at the pile of recycling waiting to go outside and ta dah! 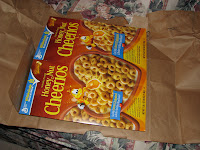 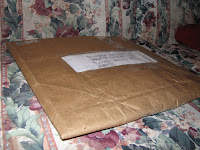 The Cheerio box was perfect once I flattened it and the 1 (it only took one!) paper bag was enough to go around it to make it look decent. The next morning I made a trip to the post office and it all should make it there in time for her "Super Saturday." Whew!

I probably won't be taking orders for a little bit at least until I can figure out the new software and iron out all the glitches. I'll let you know when I get it all up and working again. Hopefully before the Christmas gift rush.
Posted by Goings on at the Glenn's at 3:59 PM