A Visitor in the Backyard

This morning when I was changing morning diapers I glanced out the window and saw a dead bird (probably a pigeon) laying by the swing set. My first thought was eeeewww! I really don't want to have to clean that up. Then, later when I was changing diapers for a second time today I heard a commotion outside of crows.I again thought eeeww! And looked to see what was happening. Unfortunately me moving the blinds scared the partiers away. But I saw that the dead bird was no longer where I had seen it last. Instead, it was moved over to the bushes by the fence. Then later while I was clearing the breakfast dishes I glanced outside to peek at the dreaded corpse again, but to my surprise I found this beautiful creature! WOW!

And the best part is that he took the bird with him when he left. I don't have to go out there and clean it up after all. 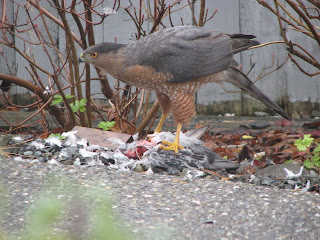 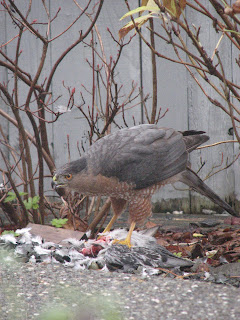 Cool picture. That is a beautiful bird. Do you know what kind it is? he must be the mortician.

Wow! That is so cool! Thank you for your sweet comments yesterday. They really helped buoy me up.