Parenting At Its Finest!

What do you do when your kids fight from the time they wake up all the way til dinner?
You find one of your husband's XL shirts of course!

This Saturday was just like this. I kid you not. Ethan and Kiera fought, argued, and whined from the minute they got up until dinner time. I had been the police man all day! And I was worn out. I had done time outs, taken privileges, screamed and yelled to quit, tried to come up with some fun projects to keep them busy but even then they fought over that too. Enough was Enough!

I remember one time growing up fighting with my younger brother and for punishment my mom had us hug for 5 minutes straight. I hated it! But in the end, it inevitably turned into a wrestling match and giggles. So I decided to try something similar just to try and change the mood in the house. I was desperate!

I told the kids to stand in the living room and I put daddy's shirt over both their heads and had them both put their arms in the sleeves. THEY HATED IT! Kiera whined and complained. Ethan squirmed and they both argued and bickered, "don't pull on me, You're choking me!, whine whine whine!" I loved every minute of it! I then explained to them that if they wanted to go somewhere they were going to have to try and do it together.  I told them if they wanted to sit down and watch a movie they would have to sit down together. I said, "you've been fighting all day, now it's time for you to work together. It doesn't matter if you like each other right now, you have to learn to get along.

I even got the camera out and boy oh boy did Kiera hate that! I am pretty sure I heard her say a couple times, "this is stupid!" "I hate this" but I ignored it. I told them I was taking their picture to show them later what them fighting looks like. Didn't make it any better, but mom took her shots any way. Don't they look happy? :) 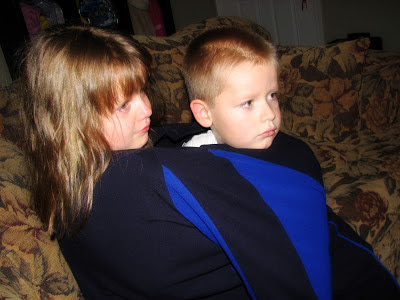 After a few more minutes of torture I then asked each of them what their sibling did that day to make them upset. We exchanged apologies and then I threw in the kicker. I told them we weren't done. "What?" Just because we said sorry doesn't mean its all better. I told them to look each other in the face. Ethan smirked a little and Kiera fumed. Then I told them to touch noses and hold it there. And that my friends was the magic moment. Everything was right again! 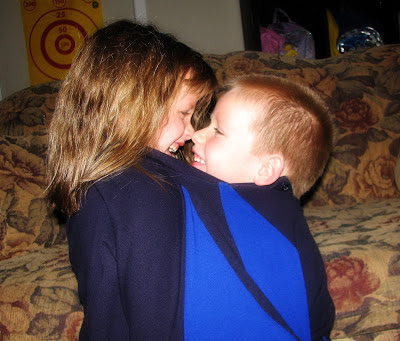 I sighed a sigh of relief and thought, "now there's parenting at its finest!" And now I have some new parenting artillery in my belt that works. Oh yeah...Motherhood rocks!
Posted by Goings on at the Glenn's at 10:47 AM

Haha. Too cute Brittany. I think I may also have to try it one day.

Brilliant Brittany!! You're an awesome mom. :)