The Joys of Potty Training

I told a few of you the other day that I was working on potty training with Kiera. I had made a skirt for Kiera and you've already seen the post of that but the next day I thought it might be fun to give Kiera some incentive for using the potty. I made a matching skirt and hair bow for one of her teddy bears (who is now called Sarah). I let Kiera open her surprise when she got up that morning and told her that we would set the timer and every time the timer went off it was her job to take Sarah to the potty. Then Sarah would get a sticker (which Kiera gladly put on our potty chart on the back of the bathroom door). All morning and up until nap time Kiera loved her new responsibility. She would get so excited and would stop whatever she was doing to run her new friend to the bathroom. Then it was time for naps.
The other part of the plan would take place when she got up. When Kiera got up I told her it was her turn to go to the potty when the timer went off. She happily did so, but only once! All the other times that I tried to get her to go, she would refuse and throw a fit. So since then we have gradually tried to get her excited again. Every once in awhile she'll ask to go on the potty but we haven't had any luck yet. She does however haul her "Sarah Bear" everywhere and she loves to wear her skirt around during the day (we usually end up putting it on over her pants). What are some things you've done to potty train your little ones? 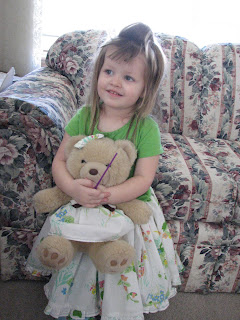 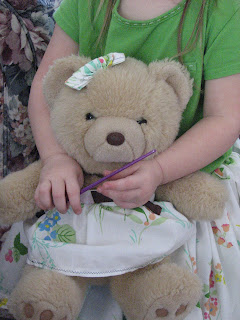