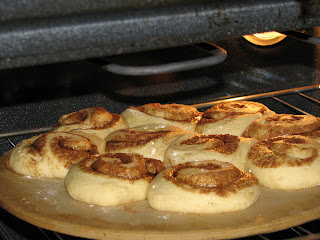 Last week I was craving cinnamon rolls. They sounded soooo good! (no I am not pregnant. This was just one of those non-pregnancy cravings). Anyway I decided to make some. I was a bit disappointed when I found out that I had to let the dough sit in the refrigerator overnight ,but they were well worth it! It has been a long while since I put a recipe on here so I thought I'd share this one with you. Just so you know this recipe says it makes 3-4 dozen rolls so keep that in mind. I thought it was waaaaay too many so I had Dan bring a co-worker home from work with him so he could take some for his family as well. But I don't have any problem in sharing either.

Directions:
In a large pot (I used my stock pot) bring on cup water to a boil. Add teh 1 cup butter, sugar, and salt. Remonve from heat. Add the 1 cup cold water. When the mixture is lukewarm, add beaten eggs. In a separate bowl, dissolve yeast in the 1/2 cups warm water. Allow the yeast to rise for about 5 mins. until foamy. Stir into mizture. Add flour and stir together. *Don't worry about getting all the lumps out just make sure it is mixed well.* Cover pan with lid and refrigerate overnight. (I just put my stock pot in the refrigerator but the recipe says that a 5 quart ice cream bucket with lid works well too).

Roll up felly-roll-style and cut into about 12 rounds. *I used dental floss to cut the dough* Place the rounds on a greased baking sheet. Follow the same procedure with the other portions of dough. Let raise for 2-3 hours. Bake one sheet at a time at 375 degrees F. for about 15 mins or until lightly browned. Spread with Powdered Sugar Glaze while still warm. *I just used left over frosting from a can, and it worked great too*

Enjoy and tell me how yours turned out. Also stay tuned for my crock pot bacon potato soup that I created last night. It was wonderful!
Posted by Goings on at the Glenn's at 1:27 PM

Cinnamon Rolls are one of my favorite treats in the whole world! Way to go!

Got something for you! Come on over to my blog!

Goings on at the Glenn's said...

I saw that actually. I will have to get on that.