Stop number 1 on our trek to Boise

Two weeks ago the kiddos and I started a long vacation to visit family.
My mother-in-law Shellie just happened to be on her way to Utah for a family reunion and asked if I wanted to tag along for part of the trip and be dropped off in Boise on her way over. It was perfect timing since we had already been trying to figure out how we were going to make our way over there for my sister's graduation. It worked out perfectly. I kept Shellie company and she helped make the long car ride over with two little ones easier. I know I wouldn't have survived doing 8 hours of that on my own.

On Saturday June 17th, Dan drove the kids and I four and a half hours to Oregon City to Dan's parent's. It made it very nice to make a stop at Grandma and Grandpa Glenn's to let the kids get their wiggles out and play a bit.

Grandpa had bought a trailer to pull behind his riding lawn mower specifically for giving grand kids rides in. The kids and I got to ride around the back yard in it. It was very bumpy but Kiera loved it! Ethan didn't have as much fun riding in the trailer but he sure enjoyed climbing in the drivers seat of the tractor. He and Kiera took turns sitting and pretending to drive.

We spent the weekend there and went to church with them the next day and then that evening Dan headed back to Marysville without us. This trip was going to be the longest amount of time Dan and I have been apart since we've been married. I know this may sound corny, but as soon as he was gone I already missed him.

The kids slept really well Sunday night and I was happy because Shellie and I were headed out bright and early the next day. I didn't want the kids to be cranky the entire way. 8 hours of screaming didn't sound very fun to me.

I am in the middle of working on my other posts telling you about the rest of our trip. There are a lot, so keep looking for them. 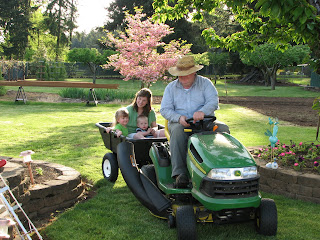 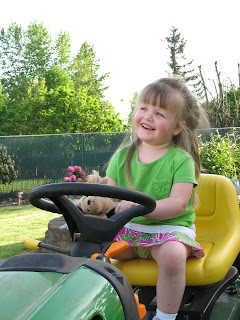 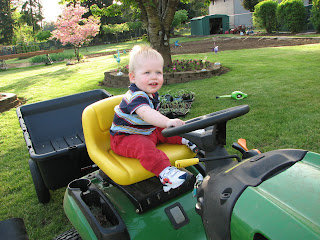 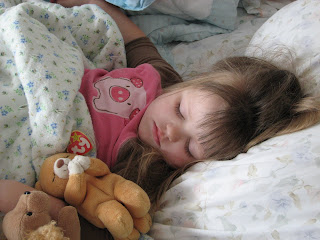 Brittany, those are the cutest pics of your kids on the tractor. I love it.