This past weekend we celebrated the fourth of July but the day of the fourth in some ways we celebrated Christmas. We made our way to Seattle and saw the Disney Tour Train. They have been making their way accross the country and Seattle happened to be one of their stops. Disney is making another movie A Christmas Carol and it comes out around Christmas time this year. 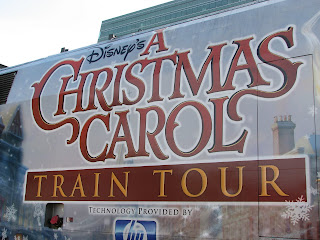 Here's Dan and Ethan making our way to the train. The kids have never been on a real train before and this was exciting for them. It was especially exciting for Kiera. She looked forward to it from the time she found out we were going. 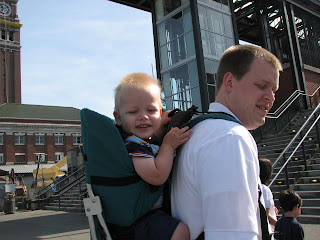 In one of the train cars there were a ton of flat panel TV screens with scenes from the movie showing you how they did the animation. It was fun to see and the detail put into it was amazing. 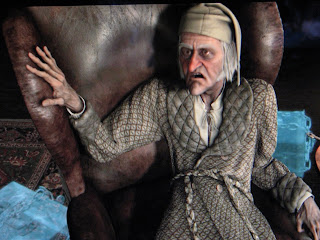 The animation for this movie was done similar to that of Monster House where there were actual actors, but they wore special suits so that their motions could be changed to digital animation. But in this movie the animation was taken one step further and the features of those particular actors were incorporated into the animated characters. Scrooge is played by Jim Carey. He isn't one of my favorite actors but he did a great job as Scrooge. 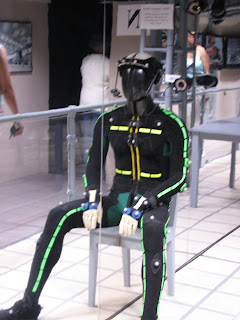 These are pictures of clay models of the faces for Scrooge and Bob Cratchit. These were later taken by the digital artists and transferred into the computer. Pretty cool huh? 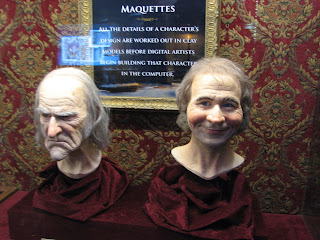 Before and after getting on the train we were greeted by these carolers. They walked up and down singing Christmas carols. Both Dan and I thought they did a great job. However I felt sorry for them having to wear those costumes! They must have been dying from the heat! 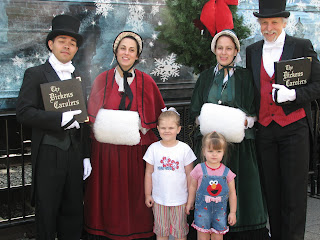 The last train car was decorated with Christmas dinner and a cozy fireplace. I hoped to get a family picture at one point but Kiera was too busy hanging out with her cousin Florence to do anything with mom and dad. So here's one of just Dan, Ethan and I. 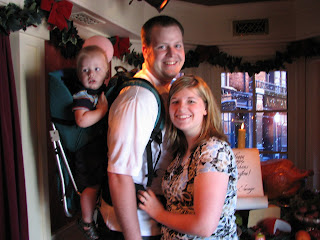 All the kids got stick on tattoos from the crew members as they were leaving the train. They were two candy canes in the shape of a heart. Kiera loved it, and is still showing it off. I wonder how long it will last. 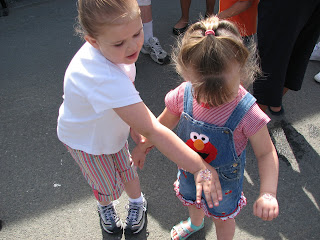 We had fun and are glad that we went. After the train they had a giant blow-up theatre where they showed the movie preview in 3-D. The best part was that is was totally free! and it is something Kiera will remember for a long time.
Posted by Goings on at the Glenn's at 3:55 PM

Wow, that sounds like a blast! I love those free activities!